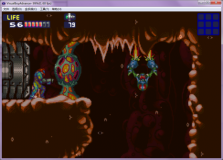 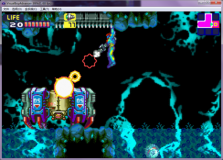 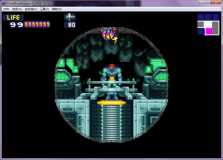 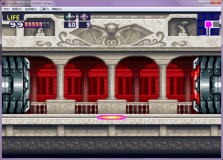 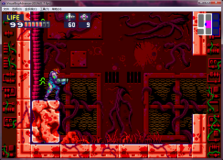 )
22% in 3:09
Read More
The Mass is actually a really neat Fusion Hack. It provides a lot of interesting twists, new physics, and changed rooms. I'd rate this higher than 3 stars but the one thing that brought it down for me was the fact that it ended way too early, and the shinespark puzzles are very annoying to go through. I wanted to play more of it but unfortunately it ends after a chase with the SA-X. Aside from the lackluster ending I recommend that you should play this hack. It's extremely interesting.
By Sapphron on Mar 08, 2020 (

)
27% in 2:17
Read More
One of the most unusual hacks I've played so far. Custom physics, custom graphics, a lot of cool things to see here. The game ends shortly after Yakuza sadly. This hack has a lot to offer though! Was pretty good. Mild seizure warning in this hack, in Sector 6. You'll think the game has crashed, but it hasn't. Speaking of crashes, don't die in Morphing Ball. The game literally hardlocks and you have to reset.
The way forward isn't always that clear, and a lot of Sector entrances are inside OTHER sectors. You can fall out of bounds a lot surprisingly, so be careful about that. Enemies deal a looooot of damage too.
Overall, unique hack.
Finished.
Recommend.

)
17% in 3:15
Read More
I attempted this hack multiple times since it appeared on the site, but never made it too far until the past few days when I picked it back up. While there are aspects of the hack that make it seem like a 2-orb hack, I think the overall experience warrants a 3.
So, The Mass. A very interesting and challenging experience. I often found myself using the linked video to guide me on the most obtuse parts.
Observations/little thoughts:
-There is no new map, it just uses the vanilla game's. Have fun!
-Soft-resets have the potential of allowing part of the custom title music to continue playing the same note ingame after launching a file. Certain music change events clear this though.
-Various bits of gfx seem to reflect what I'd assume are in-jokes at the Chinese site this hack was first distributed on, can't know for sure myself especially since I don't know Chinese.
-Also I like the NES gfx, like with the Mario things, and with that whole room that uses the gfx of Contra's final level.
-The bomb and PB gfx were swapped, was this intentional?
-The Sector 6 glitch room: after the SA-X chase, the door transition cycles through a bunch of glitchy graphics with no player input allowed for like 10 seconds or so and then plops you into a room full of said glitchy gfx.
-Plenty of OOB opportunities.
-Now let's talk gameplay. Sector 1 was what made me start using the video, with the forced damage from the stabilizer to be able to shoot it, and the lava run to one of them.
-A thing I found quite neat, despite the jankiness, was the little walls made of slopes where you can charge speedbooster in place. Maybe a future hack could fully implement a kind of "Speedbooster Post"?
-On that topic, the shinespark puzzles were indeed kind of a chore sometimes, demanding you keep up the ante for multiple sparks. That sorta thing's definitely one where my trial and error process kicks in.
-Physics changes: aerial movement is quite a bit faster, something I was able to get used to fine.
-Oh, and the bombs; I thought the way they just instantly blew up and launched the player high was quite amazing, honestly.
-The changes to the Gerons caught me off guard, like with the purple Gerons in Sector 3 blocking of BOX's area, which are now immune to Supers, carrying a bunch of bomb blocks like Atlas holding the heavens.
-The hack does get cut a bit short, pitting you against the Omega Metroid shortly after the fourth SA-X chase. By the way, this hack first came out the year before interdpth released Omega Freedom, yet managed to implement similar functionality on its own, so that's quite impressive.
All-in-all, a worthy hack despite its shortcomings and rough edges. Managed to reach the end with 3 E-Tanks (well, 4 in the display with 00 as the max value for the fourth one, whatever idk). I recommend giving this one a shot if you like Fusion. If you're not so much a Fusion-eer, your mileage may vary.