Description
Get ready to rumble...

Starting with the elevator room at the Ruin's entrance and extending through to the Sunchamber, this is a map of Metroid Prime's Chozo Ruins, in SNEStroid 2D.

It is somewhat condensed compared to the GCN game- all the boring tunnels are gone, and save rooms have merged into the rooms they were connected to. Other "main" rooms have been combined as well, when I felt it appropriate. The route diverges slightly as a result, early in the game.

I hope you enjoy your stay on Tallon IV! 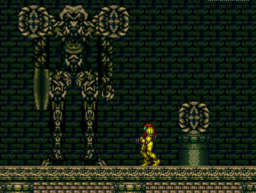 )
75% in 0:24
Read More
Decently fun hack that has some really clever workarounds of Prime mechanics. Unfortunately, the lack of enemies in some rooms means you'll have a hard time refilling if you get low on health, which you probably will because of how much damage the poison water does. Could use some updating, but it shows a lot of potential for a larger SM-Prime hack.
By kkzero on Mar 05, 2020 (

)
81% in 0:36
Read More
Definitely a fun little conversion of the Chozo Ruins sequence in Prime 1 using what SM has to offer. The Kraid fight was kinda neat, too, even if rather tedious at first.
By Syphon on Mar 06, 2020 (

)
150% in 0:20
Read More
Very enjoyable. Kraid was interesting. Would be great to have a full Prime-to-SM conversion hack some day in the future.
By ZeroSuitSammy on Apr 29, 2021 (

Read More
It was enjoyable to a degree. At first, you got to look at the statues and the palette and reminisce on your time playing Prime, but then you got kind of sick and tired of everything being the same bland color. You'd enjoy the challenge of pulling off certain stunts and you can remember playing through similar sections in first-person 3D, but then you get sick and tired of having to do the same quick-time morph transformations to get missile tanks. Looking at the map, it seemed to be a relatively compact world that just ended up feeling too big. There was some falling by accident and having to climb back up, but that wasn't so bad. It was searching for those missile blocks and and the blue blocks to activate switches that got repetitive since they were usually pretty far away from each other and the switches always reset themselves when you enter the room again, so you'll have to redo the "puzzle" from the start.

Then there were the enemies. There were too few in the areas you needed them the most, so you'd usually end up having to go to one spot in the middle of the map to find an infinite enemy spawner. Imagine if there was ONE spot in Brinstar you could go to refill your energy.
That polluted water DRAINED your energy. This is very apparent during two of the boss fights, one of which being the bomb guardian, who backs you up to the left side of the room and swipes the platform out from under you, dropping you into the polluted acid water. Then your only resort is one of the two or three pillars shooting fire from their tops. You can dodge the flames by standing on the edge of the pillar, but if you do, defeat him quickly because if he hits you, it's back to residual acid damage for you, with some added flame damage if you're (un)lucky. Most boss battles that take up the entire stage, like Kraid, leave you with a platform to stand on at the far end of the room, without leaving you completely impervious to enemy attacks, and you can get in closer by choice to get more hits in at the risk of taking more hits as well. However, in this battle, they take that from you, forcing you to take damage. This isn't your fault as the player, it's just a poor design choice.

Kraid was the worst of all. Who in their right mind would think killing themselves is the way to kill the enemy? I'm sure it was supposed to be an interesting surprise for players to figure out how to defeat him, however not everyone's going to think to do this. What you're supposed to do is shoot his eyes to back him up and, when the water level drops, roll under and bomb hit feet. Of course, usually, his feet would be submerged in acid so you wouldn't even see them anyway, so it was never something you'd even think to do. Touch any other part of his body and it'll deal damage to you, but his feet, oh no, that's his literal Achilles's heel. You can just roll up in there until the water comes back, but if you haven't lost much health, you can really just tank it and bomb him until he dies. This sounds like a great alternate strategy to defeat him faster, right? But that's not an alternate way to beat him, it's the ONLY way to beat him. To quote dewhi100, the creator, "I made it so that you can only hurt Kraid with his belly, with bombs." Now, you'd think that if he doesn't take damage any other way, you'd eventually figure this out. There's a tunnel at the bottom that's only accessible by morph ball. Sounds like good game design to me. What's not good game design is when you try to defeat him the normal way, by shooting charged shots or missiles into his mouth, and he flashes as if taking damage, despite not actually taking any damage. At first, I thought he was just given way too much health, but it would eventually whittle down and he'd be defeated, but the fight dragged on and on. So I looked it up on YouTube and found the creator's own playthrough of his hack, something all creators should have online, a runthrough of their hack to prove that it's beatable and to show anyone who's stuck how to get unstuck. This is where I got that quote from. I watched him do the same thing I'd been trying to do for the last 15 minutes in under 60 seconds...

Then you get the Varia suit, go into the lava area, beat a pair of those annoying jumping space pirates, the ones who served as Ridley's "royal guard" in Super Metroid, and gearing up for the final boss, it just takes you to a room you'd already been to before.
That's it. Show's over, you've completed your tour. No ship getaway, no finale of any kind, there's just nothing left to do. This hack is labeled as a Quick Play which does live up to its name, but that implies that it can be "completed," otherwise it would logically be labeled "Incomplete." Definitely leaves the wrong impression.
I don't know; it was fun at first, but everything it tried to do overstayed its welcome at one point or another. It does have the potential to be something special, but it still has a lot of cleaning up to do.
"Finished" (as much as you can "finish" this hack).
Can't say I'd recommend it as it is now.
Video is the creator's playthrough.

)
No completion stats.
Read More
Kinda good hack, loved Kraid. I'd recommend this hack just so you can see Kraid.