Description
This is a hack of Metroid: Zero Mission that removes the exploration element of Metroid to focus on the boss combat. The game begins in a series of hallways where Samus can collect any and all of her power-ups. Following this are 3 different paths that lead to the 3 different ways you can fight the bosses.

More information on the features and quirks of this hack can be found in the readme. 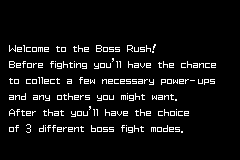 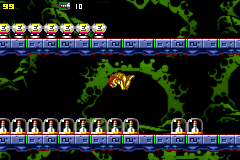 )
52% in 0:10
Read More
Decent boss rush hack, better than Boss Rush Mode but you're better off playing Metroid Combat if you want a real boss rush experience.
Finished.
Do not recommend.

)
100% in 0:16
Read More
Interesting barebones boss rush that even gives you choices on things like if you want to heal or not after each boss. Not much else other than that though.
By FrenchLightningJohn on Feb 05, 2021 (

)
41% in 0:11
Read More
time is single segment IGT, this is a decent boss rush, like saph said, better play metroid combat for a real good boss rush experiance, would not really recommand it