Pit yourself against all the bosses in the game, room after room with some healing save rooms in between. All power ups are given in the beginning for you to pick. Try to aim for a fast time with the lowest item collection percentage possible!

There are some weird graphic errors now and then as you can see with Kraid in the screenshot. This results from changing the tileset. It does not hinder the gameplay. 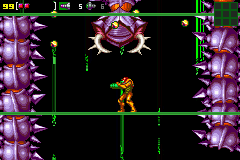 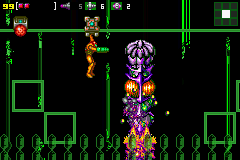 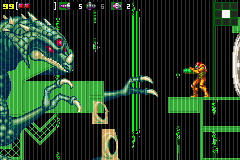 )
76% in 0:10
Read More
Interesting graphics! Didn't always work out too well, but I liked the Matrix style. Clearly very old as doors are too long, tiling errors as results of bosses being shifted, among other things. Lots of item collection at the beginning, probably took longer than the rest of the hack did honestly. Lots of random door transitions that I suppose were meant to warp you out of certain areas, was kinda disorienting. Charlie can be skipped if you walljump up to the top, as there's an air block in the top left that just lets you get past and fight Mecha Ridley as suitless Samus. FUN! It's also impossible. Served its purpose as a Boss Rush hack, but not worth a playthrough.
Finished.
Do not recommend.

)
100% in 0:14
Read More
HOLY SHIZZLE I SAW THIS HACK IN A YOUTUBE VIDEO IN 2011 I WAS SO YOUNG AND NOW IT'S ON METCONST AAAAAAAAAAAAAAAAAAAAAAAAAAAAAAAAAAAAAAA--
Real talk, this is a simple boss rush hack. The door transitions are shoddy, and you get spoiled with all the items right as you get started on it, so it's a walk in the park. The graphical style is quite neat for an early GBAtroid hack, though. Still, the experience ain't much, and you're not missing out on a lot if you avoid it.

Read More
Boss rush. that's it. almost all items at start. was fun. matrix style.
but too many glitches as pointed out by others and confusing visually but not bad.
did the run in 2015.