Description
This is a complete hack for the NES game Metroid in which you play once again as Samus who has been captured by the Space Pirates only to escape and achieve victory! The level layout has completely changed and the level graphics have all been changed as well. 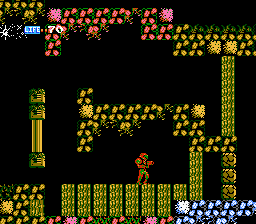 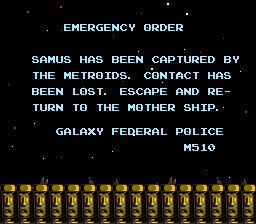 )
% in 3:06
Read More
This hack is special levels of dumb. Real special.
The layout is very similar to the original game unlike what the description says, but rooms are definitely changed. Graphics look very nice, for the most part. Door blocks/transition blocks are used a ton and a few of them make for good puzzles, but a few of them literally lead you into solid blocks or OOB. Some areas that you could go to in the original are totally gone, like Varia Suit. You're stuck up there if you try to get up.
Kraid's Lair is a massive maze that makes no sense. Once again, the transition blocks are used. And they aren't used well. Kraid's fight literally needs Wave Beam and 1-2 e-tanks or you'll die in the acid. It's the only way to kill him and it sucks. I never found Varia...
And the worst part, which it shares with some other hacks.
You lose items.
Sometimes upon death/Up+A, you will lose 5-10 missiles and 1-2 e-tanks. It's total BS and I lost one e-tank upon entry to Tourian because of this. Fix your game!
And Tourian sucks. You have to forcefully despawn a Metroid to keep going, and it's in the worst room. MB's room is unchanged, and the escape is garbage.
Do not recommend one bit.
Finished.
time is rta

)
% in 2:30
Read More
Rather janky and obtuse at times, especially early on... but I kinda liked it. Mind you, it has it's fair share of nonsense, but the graphics are nice and it has a number of clever ideas using wraparound and door blocks. As it stands however, I had to play with the editor open most of the time because I couldn't ever quite trust it as much as I wanted to -- there are a couple places early on I think you can get softlocked, and there are a few too many areas requiring advanced techniques.

The worst bit is at the starting screen, where you have to just barely walk off a platform to do a mid-air jump to get the morph ball. I thought you had to get the high jump first, but as far as I could tell that requires missiles, and the earliest missile pack requires the morph ball.

The second worst bit, that I just wish I could like, a morph ball maze in Norfair that you had to navigate by bouncing. It's a great concept, but suffers because of the difficulty of fitting into 16 pixel tall gaps (if the gaps were 24 pixels tall, then it would be just fine).

The funniest bit is that the item fanfare in Ridley's lair (and only in Ridley's Lair) is glitched out. I thought the game had crashed for a second there.

I actually rather liked Tourian (aside from the escape) -- there's a couple of rather clever ideas there.

Also, I'm not sure what Sapphron is talking about with the Varia. I was able to collect it just fine. The only issue is that I had to go through some doors to fix the scrolling for some reason.

The Kraid fight is easy because you can lodge yourself at point blank range and fire missiles at max speed.

Ridley's fight is weird, since his arena wraps around from the bottom to the top of the map. I didn't even know that was possible.

If someone were to come back to this and polish it up a bit I'd say it would be worth 3 or 4 orbs perhaps.