Description
This is a hack of Metroid that includes level changes and a modified palette. 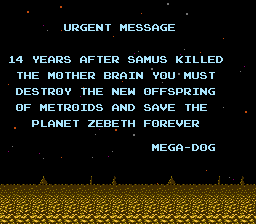 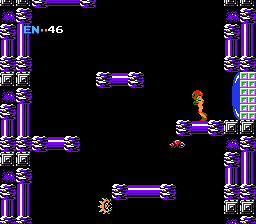 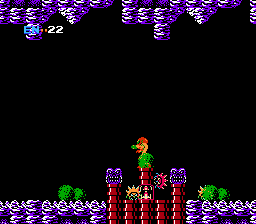 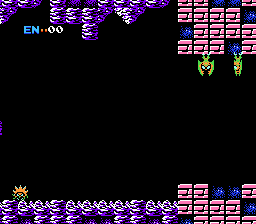 )
No completion stats.
Read More
This hack is MASSIVE. Brinstar has easily been expanded to double its regular size, making it really easy to get lost. And not in a good way.
I got past Bombs and decided to stop because the progression was spread so far out and I didn't think I'd manage to get through it without a map. You need one to beat this.
Obviously did not finish.

)
% in 1:34
Read More
This hack takes the reputation of Metroid 1 being a sprawling, repetitive, unnavigable mess and takes it as a worthy design goal to surpass. Areas are even larger, more repetitive, and less interesting. A common occurrence in this hack is for there to be a bunch of nearly identical horizontal rooms stacked right on top of each other, and they would all lead to the same two vertical shafts on both end. One might have missiles, the other ones would have bupkis, and that would literally be the only difference.

Several years ago I played this while mapping it by hand. In Kraid's Lair, I eventually found the path to Kraid himself. It was a linear stretch of decently long horizontal rooms with almost nothing but pipe bugs, followed by a 12 screen tall vertical shaft you had to climb, where one mistake could send you all the way to the bottom.

Later, I made it into Ridley's Lair, and after mapping out the elevator room I noticed that Ridley's area dipped below the lowest extremity of Kraid's area. As soon as I saw this, I just knew that I would have do something absolutely stupid like take a horizontal corridor spanning the entire length of the map just to get to Ridley. Upon having this thought I opened up the level editor and took a look at the map, and sure enough that is exactly what the hack's author had done.

I dropped the hack right then and there.

Recently I replayed it to completion with a map in hand, and it was... okay. I still wouldn't recommend it due to its flaws, but is at least polished and not super buggy, which is more than I can say for a lot of other early Metroid 1 hacks.

Be warned though, this hack forces you to 1CC it. Death (and I assume using the Up+A code) boots you straight back to the title screen without any password, and the password screen itself is unusable (all the characters have been replaced by 0). Either bring your skills or your save-states.