Description
Deep within samus' former homeworld, Zebes, a great danger is brooding, a beast so powerful, that if it ever awoke, it could destroy the galactic federation, destroy everything.

5 years ago, upon mining zebes for -missing data- the galactic federation stumbled upon this great beast.

fleeing the planet as fast as possable the galactic federation failed to shut down the LO.N.R. system. LO.N.R. is a massive low-orbit nuclear reactor and has been pumping power into the station for the past 5 years, with nowhere for the power to go, it slowly built up in the station. the LO.N.R station is soon reaching the end of its life, and will eventualy 'fall' onto the planets surface, setting off a massive nuclear explosion. waking the beast.

your mission, is to make your way to the LO.N.R station and manualy shut off the power. this is highly dangerous, normaly the station must be supercooled and then shut down, however we cannot afford to gamble that the stations cooling is still operational. you only have a 1/100 chance of survival. good luck. 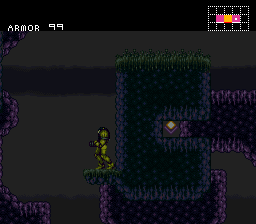 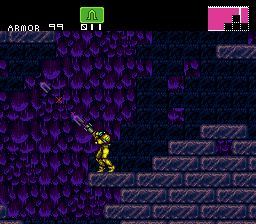 )
100% in 2:00
Read More
This is a weird, but enjoyable hack. I enjoy the resprites of the items and the progression was linear and smooth. It is leaning a bit on the difficult side (Especially that Ridley boss, yikes). But I would recommend it to someone who is familiar with SM.
By Sapphron on Jul 02, 2019 (

)
36% in 0:37
Read More
Encountered one permastuck and a crash right on the endgame block, but wasn't able to reproduce it. Going back through a certain room in the final area leads you into a solid wall, stucking you so don't do that.
And no save stations. Be careful.
Fun hack though, overall. Very unique tiling and a very nice hud
By ZeroSuitSammy on May 04, 2021 (

)
No completion stats.
Read More
It's one of the better, fuller hacks I've encountered in a while, but while it's good overall, almost every area comes with some pretty serious flaws, especially after that first elevator downward, and the second one up into Norfair. The road to the speed booster was a let down, but then the first time you're supposed to use it is a nightmare to time. You have to nail it from the exact start tile to the exact end tile. It's ridiculous. Aside from that, it looks cool, I liked the missile names and the number of items available to collect, however there were no bombs. Like, normal morph ball bombs. I hope I just missed them, but I got the spring ball and power bombs, so I never found a need for standard bombs anyway. Also, no save stations, and even though I saved at my ship, it'll never let me return there after a game over, it just crashes, so use save states. No matter the hack, I will always preach the use of save states. You're not a cheater just because you don't want to start from the beginning again. Another thing that bothered me a lot was that you can't pause, which means you can't examine Samus's equipment or THE MAP. YOU CAN'T. CHECK. THE MAP. That was the worst part of it all. Anyway, like I said, good hack, has potential. Some major fixes, and it could become one of the best Super Metroid hacks of all time. I genuinely believe that.

)
36% in 1:04
Read More
At first I had to ask myself, oh my god, will Samus be okay? But then I saw her on the end screen and I breathed a sigh of relief - thank god, she made it. This is one of the more... unique hacks I've played, the level design is absolutely ugly but functional (oh my god those Prime doors) and the HUD/weapon graphics are extremely simple. Still, it was fun to run around in even if there wasn't much to find, the world is interconnected via some later upgrades, and regular bombs do exist - they are just post-speedbooster, which is one of the last few items to collect. Short but good, and I believe the game crashes if you touch the game-ending PLM while holding the run button. Savestates recommended.