This is a non-linear hack with many different routes to take. There are a few patches applied to this hack. The most important of these is re-spin. No advanced techniques are required to beat this hack.

Story:
At some point in galactic history a powerful company purchased a beautiful plot in space. They used this plot to build The Space Grand Resort and Spa. However, there was one tiny, maybe large issue. There was a space junkyard(?) within view of the resort, and ruined the view. How were customers going to enjoy their stay at the resort with such a hideous view (that the owners of the resort somehow did not notice while the resort was being built). The answer was simple. Buyout the space junkyard(?) and have it cleaned up (blown up). The resort sent out men to try doing just this, but a mysterious force was keeping of the timebombs from going off. The company was at a loss as how to clean up (destroy) the junkyard. That is, until an intern of the janitor spoke up during a meeting, "I have heard tales of a bounty hunter that blows up almost every planet she visits doing her job." Because of this intern Samus received a very simple job--clean up (blow up) the space junkyard(?), and find out why the other timebombs were not blowing up. 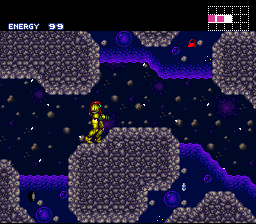 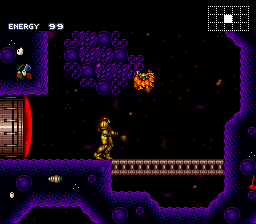 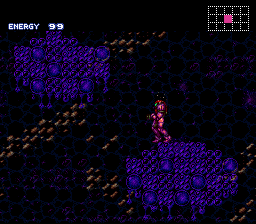 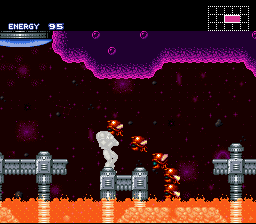 )
97% in 1:15
Read More
Overall this was a pretty fun hack to play. I enjoyed the custom graphics. Though there were a few errors still in things like slopes, it didn't really break the flow of gameplay all that much. I also liked the new names for the items. There were some annoying spots, including getting to the pre-Draygon area early and not wasting time thinking I could get up the room, and one of the grapple puzzles was also a bit annoying. Also, the Missile Refill pre-Crocomire does not work. Either way, this is a fun hack, and you should play it.
By TheOrigin on Aug 19, 2018 (

)
91% in 1:19
Read More
Overall a very good hack with some small issues. There was one room that stopped scrollingat a certain point, and I confused the game once because I entered a screen transition while the screen was still scrolling. Also the Missile refill right before Crocomire doesn't work.

And don't spacejump up at the landingsite, once I hit the ceiling, I was teleported into another room somewhere out of bounds.

Very fun to play, some places where you can sequence break, I really enjoyed exploring the quite small but open environment.

)
76% in 1:21
Read More
Note: This review is based of the contest version. Any bugs I have seen have likely been fixed in this version, so I did not mention them and thus did not effect my rating.

This was probably the best hack from the "Post Hack Scrubs" contest. It is also the largest. Crystal_Knight never fails to deliver a solid and enjoyable hack. The hack is very open ended in nature, which unfortunately leads to a lot of backtracking. This didn't bother me personally, (it is a metroid game after all) but I can see others getting slightly annoyed by that. Difficulty was much more balanced than his past hacks. He made ammo actually useful at the cost of beams being very weak. This is sightly annoying early game though, as enemies take very many shots to kill with any beam type. Lastly, the hack is aesthetically pleasing and fits the contest theme well. Well done.
By MetroidMst on Oct 14, 2018 (

)
89% in 0:53
Read More
This is a nice little way to spend a pleasant hour cleaning up the universe of garbage. The biggest flaw with it is there isn't really much of a direction for the player. You can get places and find things, but there is basically one spot to get certain things, and it isn't always easy to find out.

Otherwise this is a fun, and definitely recommended, hack that is full of bubbles and junk.
By Ri2nOneRok on Nov 23, 2019 (

)
% in 1:41
Read More
Fun playable hack, kept me interested to play it through all in one sitting. Breakable sequences detected.
By Syphon on Nov 24, 2019 (

I really loved the graphics and how open it was.
You can get a lot of items early like Ice and Wave Beam which really helps considering the beams are a little weaker than usual. However you can also get to Draygon without Gravity (and Charge and Supers) which means you can't get out.

)
84% in 1:32
Read More
Realy good hack I have to say, I enjoyed it. I generally like quick plays that are not overcomplicated and I can safely say this one did it well.

the fact that I missed Kraid tho made me so mad cuz I had everything BUT Kraid xD near the end. But then I realized "OH DAMN there was still one room I forgot!" =D
By Sapphron on May 22, 2021 (

)
93% in 0:55
Read More
Fun contest hack! Sticks to the theme quite well, and it's a lot of fun to play.
Pretty compact map and really nice graphics, fun room design etc.
Finished.
Recommend.
By DeviousB on May 30, 2021 (

)
93% in 1:04
Read More
Quality short hack but a full enough experience to be worth playing. I don't know if I have an old version but i did experience a couple glitches. In the area with the first supers it doesn't scroll proper. On escape if you go up from where the ship is you go out of bounds to glitchy rooms. Missile refill before Croc is broken. Getting to Draygon early and having no escape is annoying but with the save right there and an almost certain death it's not too big an issue. Overall it was a fun short hack that felt full enough and well paced enough that it wasn't just a hack that one goes through the motions playing. Thanks to the creator for the good hack.
By TeamFissionASMR on Jul 14, 2021 (

)
95% in 2:12
Read More
Quick, not convoluted, a lot of routing options, straightforward, not pretty but not ugly either, good design overall (also where the hell is that last item?)
By LetsPlayNintendoITA on Oct 03, 2021 (

)
100% in 1:10
Read More
A quick hack with some small surprises, very nice, and that room after grapple. man that was a scare lol also the damage from spikes yikes lol another great hack by Crystal Knight. let's hope for more in the future with your iconic icons for expansions and cool names for items :p see you next mission! another 100% done!
By Sickwood on May 16, 2022 (

)
100% in 2:05
Read More
One of my all time favorite Metconst contest hacks. Played it several years back, but played again today to try and find 100%. I think the first time I played it I expected there was a nice even number of missiles and kept looking for one more pack, but ended up finding a PB for the final item making the final ammo disturbing for an OCDer like myself. Plenty of cool little secrets and was neat that Crys was able to include all upgrades. There's a scroll error in a water grapple room, a missile refill that doesn't work, but never found any permastucks during any playthroughs. Great quick play to revisit every so often.
By Zhs2 on Jun 02, 2022 (

)
89% in 1:13
Read More
Pretty good, but presuming Draygon can kill you when you have grapple beam is a rookie design flaw. I managed to reach his room thanks to grapple and kill him with only two e-tanks and Varia only to find I couldn't leave to return to the rest of the hack. This soft permastuck only a veteran would find aside, the hack was rather fun and fresh for exploration and item gathering. Definitely recommend, but make sure you search out and gather as many missile packs as you can at the beginning - you'll need them to open some doors without running them out on enemies. Oh, and e-tanks too so you can survive the lava decontamination room.
By Zincoshine on Jul 11, 2022 (

)
95% in 1:58
Read More
note: This review has been remade for the latest version 1.2.2 which is not available on this page for some reason. That version fixes the second and third biggest problems with this hack but it doesn't fix the biggest problem of the hack which is the draygon softlock. This time around I decided to complete the hack regardless of the softlock and what I discovered is that the entire endgame is just a huge mess that contradicts the plot and forces you to run back and forth across the map several times. The latest version also fails to fix some minor problems as well. All in all, I still cannot recommend this although I would have been open to giving it a narrow recommendation if, at least, the draygon softlock was fixed.