Description
"WITH THE DEFEAT OF MOTHER
BRAIN, THE PIRATE RESEARCH
STATION ON ZEBES'S SURFACE HAS
BEEN DESTROYED. AND WHILE THE
PLANET REMAINS INTACT, IT
SEEMS AS THOUGH THERE IS NO
LONGER ANY EVIDENCE OF LIFE.
I HAVE BEEN TASKED WITH A
RETURN TRIP TO ZEBES. MY
MISSION IS TO SURVEY THE PLANET
AND SEARCH FOR ANY REMAINING
METROID LIFE. IF METROID LIFE
IS IDENTIFIED, IT IS TO BE
DESTROYED IMMEDIATELY UPON
CONTACT.
THE FEDERATION HAS DETERMINED
METROIDS TO BE OF AN
EXCEPTIONAL RISK. ANY BENEFIT
ASSOCIATED WITH METROID
RESEARCH IS NO LONGER BEING
CONSIDERED. THE GALAXY WILL
NEVER BE AT PEACE, SO LONG AS A
METROID EXISTS... IN
CAPTIVITY, OR OTHERWISE."

Journey back to planet Zebes and explore the planets new scenery and life. You are tasked with the mission of completely eradicating all metroids, after the federation had detected life forms on the planets surface. After the explosion of the planet, it seems not all living things were demolished. In fact, they know you are coming to the planet and the leader of the space pirates, Ridley, has sent his forces out to set up different locks and sealed off areas in order to keep you from entering. Breach into Zebes and stop the plans of mother brain, once again. 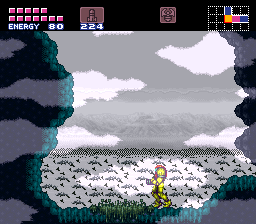 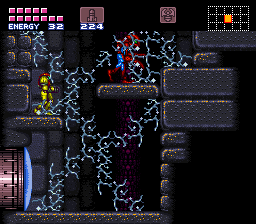 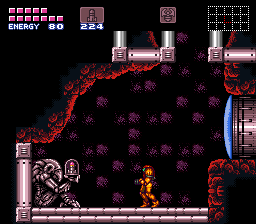 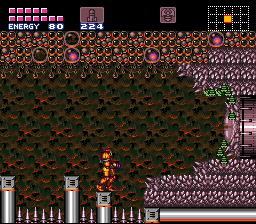 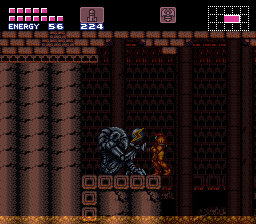 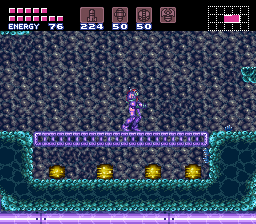 )
68% in 5:04
Read More
I have huge amount of respect for SM hackers due to the sheer complexity and scope of work, so it makes it difficult for me to be objectively critical of any hack. That being said, I'll do my best to give an honest review of Breach.

Breach is a full overhaul hack, so you can expect to spend a good amount of time exploring Zebes. By far this hack's strongest point is the ingenuity in its puzzles. There are many progression points that will require the player to think far outside of the conventional "explore and collect" box, and this adds a captivating element to Breach. Most of the rooms are very well laid out, which shows that a lot of thought and planning went into their design. The difficulty of the hack is higher than Vanilla, but not so high that it requires a speedrunner's skill set to complete. The overall balance and progression of Breach felt good, and I didn't find myself stuck or lost more than a few times. Graphically, Breach introduces a decent amount of palette swaps and clever usage of tiles not normally seen in Vanilla.

The less than good:

Breach gives you the impression that the authors were learning as the development of the hack progressed. This is evident when you first explore Crateria, as the whole area has a "novice hacker" feel to it. By the time you reach Lower Norfair, which is incredibly well-designed, you feel as though you've reached the peak of the creative arc. If this was the author's intent, then please disregard everything I've just written. Tying into that, Breach has a number of glitches that you will likely encounter - some obvious, and some not so obvious - mostly to do with scrolling. I encountered two soft locks in my play through of it. Some of the puzzles, while incredibly creative, will probably stump a lot of players due to the obscurity of the solutions. I could also just be dumb. It would have been nice to see some more graphical changes, but that's more of a suggestion than a complaint.

Overall, Breach was a fun experience and showcases some original ideas that I haven't encountered in any other hacks to date. It does feel somewhat unpolished, but that shouldn't be enough of a detriment to steer you away from giving it a play-through.

The reason I can't give this 4 orbs is mainly lack of polish and some things not being obvious enough. Scrolling errors and some random solid and air tiles in random places.

You have to find 4 switches to open the entrance to Tourian. However they don't look like switches. They look more like those elevator stands. I didn't realize you have to shoot them with Super Missiles to activate them. Nothing suggests that. Because of that I had to backtrack through all areas at the end which was really annoying. Maybe I was just dumb but it should have been more obvious in my opinion.

The map was almost useless and confused me a few times especially when it broke occasionally.

Other than that I enjoyed this hack. Level design was nice and I liked what was done with the bosses. Difficulty is a bit higher than Vanilla but not by much.

Rating for some hacks may be off by 1 Star, but arguably not more, and ratings are not attempted to be provided within the precision of ''half orbs''.
By Pixel_Tiger on Jun 21, 2021 (

)
No completion stats.
Read More
Hack is ok, got some scrolling issues though. No idea if sequence breaking is a thing here but you can get to places you shouldn't be if you know your way through the game.

Navigating through this hack was a bit meh, as my map decided to reset itself after entering certain rooms or by just reloading the game.... (no clue if it's a Rom issue)


Sadly did NOT complete the run because I got PISSED at the awful 'find-you-way-out-of-tourian' challenge in 2 minutes with changed layout... why do people think this is a GOOD idea? I can't read YOUR MIND, hack creator! (Stop this BS!!!) -2

(To explain my frustration with Tourian: I found my way through tourian escape with less than 10 seconds after BOMBING every corner... no xray... had it been standard 3 minutes, could be OK-ish)
By Sapphron on Dec 27, 2021 (

)
82% in 3:48
Read More
What an odd hack. This definitely has some good stuff, but it really looks like quintessential baby's first full hack. The map breaks when reloading/dying and the separation of the map itself is an issue, but it's good to take into account that the hack was made without a map in mind. The map work was done by Schmeman, and he did the best he could with what he had.
The game's kind of buggy and rough around the edges and I believe has a softlock or two, along with having somewhat halfhacky design with rooms that look very very similar to vanilla. My memory of it overall is a bit foggy due to playing it about three weeks ago, but I do remember an issue in Maridia with not knowing how to progress, but I don't think that's an actual big issue. Overall, a big vanilla-style hack marred by a broken/upset map and some weird design choices.
Finished.
...recommend? Iffy about it. Maybe if you've beaten a lot of the hacks on the site already.