Description
A hack made in 2000, apparently somewhat based off of Kid Icarus. Pretty sure it works, try it your self. 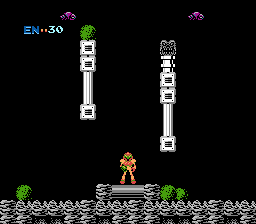 )
% in 3:25
Read More
This entire hack is a maze. You need a map.
Brinstar is a really dumb area. Part of the area makes it look like you need to abuse enemy freezing to get to the next point and door climb to a certain item, but you can just come from above if you're sneaky enough. It makes no sense.
Some rooms lead absolutely nowhere! It's not too often in Brinstar but in Norfair and Ridley you will see plenty of them. No shortage at all.
Ridley's lair was incredibly stupid, 6 door shafts which basically lead nowhere. This time, it actually seems like you need to doorclimb to proceed. You probably do. And no hack should force that.
Norfair is a maze filled with rooms that either lead you to nothing or give you one missile pack. The way down to Ridley makes no sense.
I skipped Kraid because I didn't want to deal with the hack any longer, and it threw me another curveball.
I died in Tourian, and instead of starting at the elevator, I started at a static Mother Brain room that I couldn't go through. I kept wrapping left and right and was stuck there, I had to use https://www.truepeacein.space to actually leave the place and come back. Totally stupid. Test your hack!
Overall I think this is a super bland hack with poor palettes that fails in delivering difficulty and fun exploration.
Do NOT recommend.
Finished.
time is rta

)
% in 3:31
Read More
This would be a two-and-a-half star hack if some of the glitches and softlocks were fixed. As it stands, it's hard to recommend.

Ridley's Lair is the most egregious example. There is a tiling error in one of the structures that leads to most of the morphball passages in the area being unusable (somehow, this is not shown in Editroid). Thus, finishing Ridley's lair requires door-climbing. Also, the energy tank room right behind Ridley looks like a glitchy mess. Kraid's lair is fortunately playable.

Early-game progression is a bit too obscure and too slow, especially with how large Brinstar is. Also, Brinstar has two rooms with doors that take you off the left edge of the map for some reason.

Norfair has an interesting design, but has too many dead ends with nothing on them, even though they have item orbs. (Empty item orbs and chozo statues are also a big issues with Brinstar.)