Description
This hack is the opposite of Super Hard Metroid in that in this hack everything is made easier. All enemies are half as strong and have half the health and all hidden passages and items are shown. Also, all hard to get items are easier to get such as the main street Maridia missile where you need to shinespark at the right spot to get it. 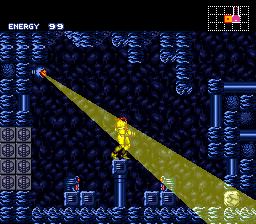 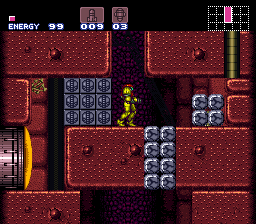 )
15% in 1:04
Read More
Something that bothered me about this hack is that the enemies are halved in dmg + health, but environmental damage (like spikes, acid, etc.) are not halved. I know that's not in the description at all but it would've been a nice touch.
Mother Brain has 18,000 HP instead of 9,000 like the hack would lead you to believe, making my low% +1 a little more stressful. :p
One other thing is that the creator did not group together shot blocks/bomb blocks like they're grouped in vanilla, like you can see in the screenshot on the right. Some blocks also respawn when they shouldn't, making things a little annoying at times like climbing Red Tower.
Overall, it is what it says. A super easy metroid.
By Syphon on Dec 27, 2019 (