Description
Hi everyone,now is 2 week a work on that and think about something that I don't not do in my three other and realise something when I see my brother to play in Super Metroid Redesign

- The creature have now a new colour that make fun to see
- I see that in Redesign a place that you play in water without the gravity and make the game more longer,I think about and say yes that is great and I did it in Meridia you play longer in water without the gravity suit
- After I think about something that I not do in my other many crazy place that you must do for take missile or perharps a items why not?
- I think about something a new concept, when you see a creature is yellow you can destroy it by spazer only,pink by missile or wave,green by super missile.
- many other thing.......

Is sure everyone got be liked this one with : a new concept that my 3 others.A new look of room,the items is now balanced I mean 4 items in each area except the Meridia 3 items in that area,the ennemy is vulnerable of all, sometime only in one thing don't worry the color help to know what is this? and sometime only with missile or beam,I add in some place a middle crazy thing to do with the speed booster ok not really crazy but something interesting.This time I take my time to build a very beautiful hack never build before. 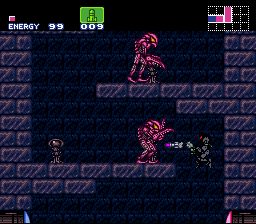 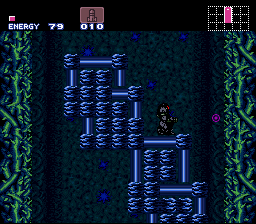 )
78% in 2:53
Read More
...no.
I expected this to be better than R3. The more time, the better, right?
No.
The color vulnerabilities that were described partially do not work. The pink pirates are vulnerable to like everything, and green pirates not being vulnerable to plasma makes ZERO sense. Minor nitpick.
I noticed the most possibilities for permastucks in this, some doors that you need supers/powerbombs to get out of and you can't refill inside. Back to the last save!
If going to Forgotten Highway, you have to go in and out the way you came. Just like R3.
You will notice a lot of random blockades in the middle of rooms, like in the second screenshot. Why are they here? They have no purpose other than being annoying!
The suitless section was really bad.
How am I supposed to figure out that a few spikes out of the twenty or so are actually crumble blocks? Do you really want me to jump on EVERY single one until I find out? I had to look up the answer to proceed. The rooms that you proceed through suitless are REALLY laggy so prepare to spend quite a bit of time in them, goin' slooooow.
Even more morphball mazes than last time, almost all are suitless.
Bosses are buffed the same amount, going to Maridia before LN is not a good idea even though the creator recommends it.
Ugh. If you're going to play a Rebuild hack, play 3.
By guilhermebrum on Jan 31, 2020 (

)
No completion stats.
Read More
Average hack.
Most positive points:
- Maintain the original physics of the game
Most negative points:
- Samus color is too dark, can't see armor details, only black
- No significant changes in the map