Description
This may be totally out-there and absurd, but I always had a big 'what if' in my mind.

What if, when you blow up the glass tunnel to get into the lower parts of Maridia... you somehow cause all the water to come crashing through the door and down the elevator shaft in the next room, flooding Norfair in the process. Then you'd have Norfair filled with water, and Maridia drained but hot-as-hell from all the steam rushing up out of Norfair. This would probably kill everything in each area. Hell, it would probably ruin Samus' day too, as she'd be sucked into Norfair by an unbelievably crushing torrent of water.

So the main thing is maridia is hot, while norfair is flooded. This greatly change the gameplay. You now have to go up and into the WS the way you normally go to maridia. You can't get into WS early the front way (at least as far as I know) as the speed booster is in the flooded norfair.

Honestly I don't know the best item routes and such, but it's a nice way to twist things up... enjoy! 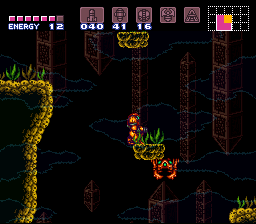 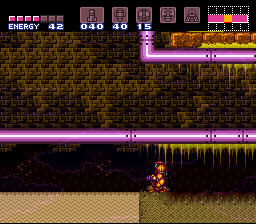 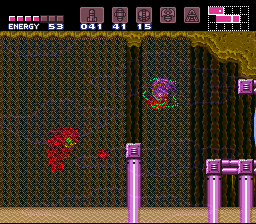 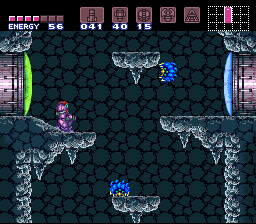 )
59% in 1:22
Read More
This hack is incredible in concept, but painfully mediocre in execution. I love the idea, but there is so much in this hack that shows me that not enough work was put in to make it work. I doubt Norfair would be completely underwater from the flooding, just the lower areas. Progression is weird and the enemies are not balanced at all. Fish should not be floating in midair in the heated Maridia. Really, the enemy sets should have switched between the areas. There are rooms that make no sense, like rooms full of lava in the flooded Norfair, flooded save rooms in the heated Maridia, and other quirks. This just goes to show that not enough was put into this hack to make it work well. Most unforgivable is that the required route takes you through sand that you can't escape if you fall into it. It's things like this that show how much effort wasn't put into this hack. Some of the rooms look nice with their palette changes, and some of them look absolutely atrocious. Play this hack if you'd like, but don't expect anyting amazing.
By Sapphron on Jul 25, 2019 (

)
40% in 0:58
Read More
This hack was really boring. I went Phantoon first because I couldn't be bothered to actually trek through Maridia to get to the Wrecked Ship, and that basically ruins the hack. I didn't get to see much of Maridia and what I did see hurt my eyes (see pre-pre-Plasma room). Cool concept, but was not executed well at all.
However, some of the palettes looked REALLY nice, like the ashy one in main Norfair. I thought that looked great.
By caauyjdp on Mar 12, 2021 (

)
40% in 1:27
Read More
Palettes looked nice. Quicksand seemed much worse without water physics. You're forced to get gravity to progress and it negates impact of most of the changes.
Nice to look at, boring to play?