Description
Info
SHM Concept and Enemy Editing: Crocomire - Adam Rowan-Kelly SHM Terrain Editing: 62C514A6 - Matt Allaire
Contact
Crocomire: yoshi723@hotmail.com
62C514A6: fftechbeta@gmail.com
Storyline / Description
Super Hard Metroid was envisioned originally by Crocomire to possess enemies that were much more difficult than normal to kill. Later, 62C514A6 joined in developing the hack, and he took the terrain to a new level -- literally. SHM's terrain and enemies work together in ways that you have never seen before. Not only must you contend with super hard enemies, but you must also face the challenge of simply navigating without slipping and killing yourself.
Additional Description Notes
The item / progression order of SHM is unchanged from the original Super Metroid.
Known Bugs
After defeating Spore Spawn, you fall down a long hall to get the first Super Missile. The camera does not track Samus properly going down, this is intentional. Do not report this a as a bug.
Occasionally, you might get trapped under a slope. Please be sure you can't escpe before sending a bug report.
Sending Bug Reports
Please send all found bugs to fftechbeta@gmail.com in the following format: (You can copy this form if you want)
Screen Name:
Date:
SHM Version:
Bug Area:
Bug Description:
Screenshot of bug: 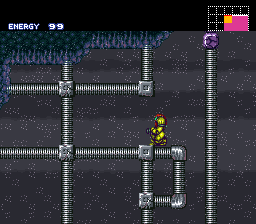 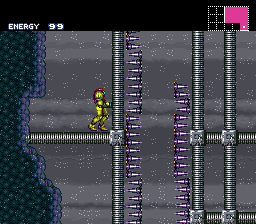 )
52% in 2:41
Read More
UGHHHHHH
This is a really bad hack. It's basically just a spikefest with unchanged item locations, frustrating permastucks, etc.
Don't play this.
Finished.
Do not recommend.
also! this is a PAL region hack, first of its kind.
By kkzero on Mar 23, 2021 (

)
No completion stats.
Read More
Yup, just another one of those old tedious "challenge" hacks, with the totally ingenious feature of Spikes(TM). Played a bit of it and stopped because it's just that. Nothing interesting about this one.