There is no wall jump. 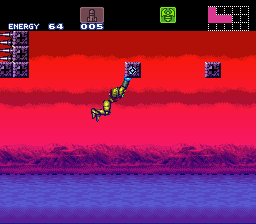 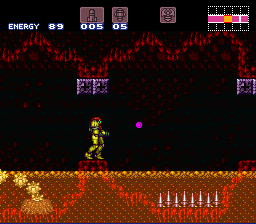 )
No completion stats.
Read More
I don't sure how to rate it.

A hack based on grappling. Finally. Grapple Beam is so underrated. With good palette and music choices. That's what I was thinking when started the game. It was fun. But then... there comes all these things I hate in hacks such as: static spikes, doors warping you to "destination unknown" like inside of hypercube, corrupting maps when travelling from area to area, untouched map though layout is changed like there is a dead end now, but map says I can proceed, scrolling sky error etc. I don't know what else I expected from that guy. Maybe that he will spent more than just few hours to make a hack. At least when releasing it on romchacking.net site.

Then I meet bosses. Boss battles are fun and easy. Really unexpected.

So, at first I was going to give it 4. Then I saw So Many Errors so I'd give it 2. I'd give 1 if there were permastucks. Then I liked the boss battles and played until the ending... until I saw a possibility to travel through whole unchaged vanilla world and collectings the items. I'd give 2.5 in total, but let there be 3.

Rating for some hacks may be off by 1 Star, but arguably not more, and ratings are not attempted to be provided within the precision of ''half orbs''.
By Sapphron on Jun 08, 2019 (

)
21% in 0:27
Read More
Wow. This hack was special.
The grappling wasn't creative and you had cramped corridors with single blocks (spikes all over the floor too), not good design.
Boss battles were kind of stupid, no difficulty in them at all.
Do not recommend. Just frustrating.
By Syphon on Nov 30, 2019 (