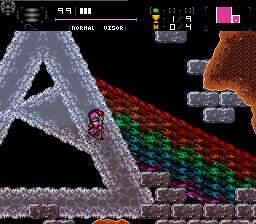 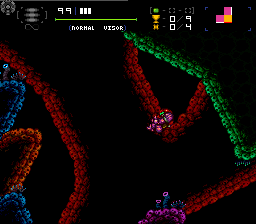 )
19% in 0:38
Read More
Small hack with some broken scrolling in the first few rooms and gibberish when picking up items. I liked the colorful look of the hack, custom music and the custom HUD though. Dark Visor was a cool feature. Worth a playthrough.
By kkzero on Mar 04, 2020 (

)
No completion stats.
Read More
Didn't beat it because of what seemed to be an absence of saves, plus I got softlocked in a Chozo statue, but I'll drop a review anyway because I liked where this was going.
The ammo switching method was a bit awkward for me, but that's more subjective. Additionally, the colors of the structures tended to throw me off before I got the Dark Visor. Despite these, it was an interesting experiment that felt very fresh, and I enjoyed what I did play.
Recommended.
By Sapphron on May 19, 2021 (

)
19% in 0:35
Read More
An incredibly jank but interesting hack.
Never found out how to switch to Plasma, Dark Visor was cool but useless, plenty of secrets. Really pretty rooms, but it's hard to distinguish foreground from background. Pausing is a really bad idea, it takes forever to fade back in.
2 -> 3 stars for the effort put into it.
Finished.
Do not recommend.