Description
Story - a monster has escaped captivity on the GFS Horizon and is fucking shit up wreaking havoc, so the GF told samus to go deal with it. Once finished, she is to go back to her ship and leave the rest to the GF.

Changes - custom hud with an item finder in the top left hand corner which lights up if there are items left in the room. Enemy asm edit to both the main boss and the enemy boss. New items include gravity boost, dark visor, and super missile upgrade. Mostly vanilla gfx, with one unfinished custom tileset based off of the fusion sewers and a new background for the maridia tileset.

Things to note - Item finder does not work perfectly in a few rooms. Those rooms are as I recall the large maridia room, the first sewers room, the first room after the boss, and the elevator room (I have a fix for this courtesy of Black Falcon, but I haven't looked into it yet). the lack of backgrounds in some rooms is not actually me being lazy (only partially), I found the black background to work very well in those rooms so I decided to leave it. The ending is well, different. the game ends when you get to the game over screen from ceres exploding. Luckily you have a built in timer on the hud so you can know your time before it ends. The end game only activates once you have all the major items, which really means once you've defeated the monster and looped back around to the ship.

Some people (2 that I know of) have been having strange issues with my hack while the rest are not. I have done plenty of testing on not only zsnes, but also snes9x 1.21 as well as geigers debugger and I have not been able to replicate it. It seems to have something to do with button mapping however I tested the various combinations myself in various sit 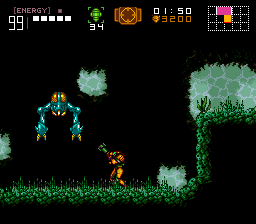 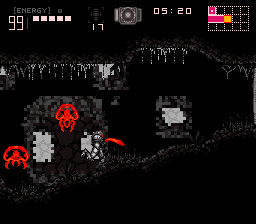 )
No completion stats.
Read More
This is more like a tech-demo. Has some very interesting things, including a new visor, but is really small and is pretty buggy. You've got a couple of custom items, both of which are pretty rad, but the underwater gravity boost is a little awkward to use. The Dark Visor is something that has serious potential, but because the hack is buggy, it may or may not work for you. This isn't a hack worth playing for the hack itself, but it is worth playing to see some new items. (Hopefully they get a public release.)

Rating for some hacks may be off by 1 Star, but arguably not more, and ratings are not attempted to be provided within the precision of ''half orbs''.
By MetroidNerd#9001 on Jan 18, 2019 (

)
30% in 0:18
Read More
I enjoyed the new things the hack had to offer, at least the ones I found. There were some neat spots, but also frustrating ones. A gripe I have is that there is no indication of how to use the Gravity Boost when you get it, but more frustrating was the silhouetted Botwoon. I was probably supposed to have the thermal visor there, but I couldn't fund it, and when I looked around a bit and wandered back to my ship, the hack just ended. Buggy hack, interesting graphics. I hope to see the new upgrades in a full hack someday. (Completion stats are estimates)
By Papyrus on May 09, 2019 (

)
No completion stats.
Read More
For some strange reason when I start the hack can not continue because at 5 seconds it appears to me that the space station is destroyed, I try it 6 times but I can not
By JaceTheBodySculptor on Aug 16, 2022 (

)
No completion stats.
Read More
Cool, memorable boss fights. The big hopper’s health is high enough that it gets a bit tedious, but with it being a single fight, I think it’s appropriate. Dark Botwoon was terrifying and an ideal boss for my taste - one that kills you a couple times but eventually you adapt or get lucky and beat it.

Downsides: In some circumstances, the game will crash after you open the map. There’s a softlock in a morph tunnel with a nasty slope at the end of it. There are some powerful enemies after Botwoon and it would be a bad player experience to die to them without saving after the boss fight. Gravity Boost directions should have been put in the hack description (you hold angle down and jump).