Description
This unfinished "thing" was made in 2014 as a learning experience,
decided to make it finishable. Find a way to escape the doomed planet where its sun is turning into a red giant.


Must know how to simple short charge, wall jump and mid-air morph
all items is 33%

Known issues:
-Potential no Morph stucks
-Can only save at ship
-Map is broken

Call your doctor if the inside of your head is starting to itch :> 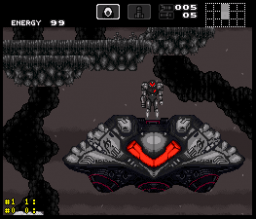 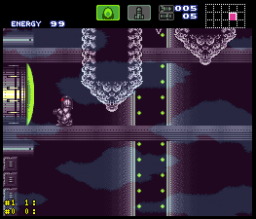 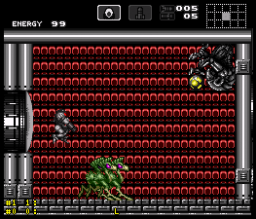 )
18% in 0:00
Read More
This is a very up and down hack. It has things like no save stations, a non functioning map, and a gate that flat out didn't work which forced me to get a very useful item much later than I should've lol. But it also has some great rooms, moments, and the overall experience was definitely enjoyable. Give it a try, and use save states if you must.
By KPF on Apr 02, 2022 (

)
No completion stats.
Read More
This hack has some nice ideas, and you can see where some of the ideas for Ascent started out, but this hack doesn't really stand well on its own. Too many things are broken or not built correctly that the hack can be annoying to play at times. I didn't finish because I went in a circle a few times, and the lack of a map meant I had no idea where I had been or where I could go. It's nice that this hack exists, but it's not something you need to play.
By jamablues on Apr 14, 2022 (

)
23% in 2:00
Read More
I actually like games like this where you have to figure out stuff with little clues :D
some good ideas in here!

)
25% in 0:16
Read More
This is definitely a hack that was made.
It's a very odd hack with a major amount of issues including the many random crashes that I got, forcing me to start from the beginning again because I was a dummy and forgot to put the SD card in the flashcard to save SRAM. Was 2 stars before I figured this out, now it's 3.
It's got some cool ideas especially in the lower section, and a looooot of stucks. Overall it was okay and had some good stuff in it, but the way it's structured definitely isn't ideal.
Finished.
Do not recommend.
By therealsusan on May 06, 2022 (

Played for maybe 10 minutes tops. Got hit once and my health was at 03/99... Figured I'd go until I died which was like 30 seconds later.

Can't bring myself to play this.