Description
This short hack was made in two days. The world was created in less than
24 hours but due to some major problems we had to work on the hack for
another day!

Space Pirates have stolen a Metroid Egg while you were on your way to the
Ceres Station. It is your mission to extract the Metroid Egg from the
Pirates' Space Station on Planet Buna SS0 in the Nulia system and return it
to your ship!

About Hard Mode:
Hard Mode is unlocked by default. One particular boss, however, is extremely
difficult on Hard Mode, especially for newcomers. We reccommend to play the
hack on either Easy or Normal on your first playthrough! 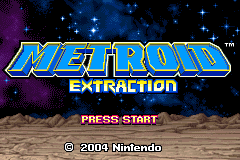 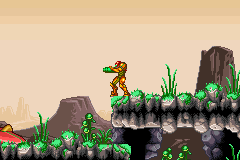 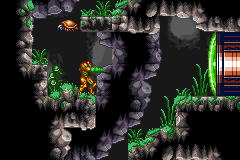 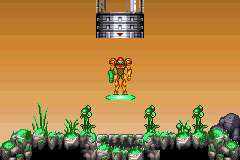 Read More
A cool small hack with interesting stuff.
the final touch was cool.
and the music <3
needs some phendrana tho.

)
75% in 0:23
Read More
This hack has some neat ideas, but it overall left a sour taste in my mouth due to its poor balancing, especially surrounding its bosses. While the custom music was neat, some of it was also ear grating. I don't know exactly how custom music works for GBAtroids, but I think that some of those songs could have used some instrument changes to help them work with the GBA's sound font more. The new features are a welcome addition, but they're really the only thing bringing this hack up. The overall level design is passable but unremarkable. By far, though, my biggest issue is the boss balancing. The main boss takes forever to kill if you haven't found all the secrets, but one of those secrets is locked behind a secret boss that deals way too much damage and is immune to Super Missiles for some reason. With some rebalancing, I think this hack has potential, but right now (Version 1.2), this hack has a few too many issues for me to be able to enjoy it fully.
By SN_Ivan on Mar 09, 2022 (

)
100% in 0:30
Read More
Cool short hack! Made in 24h, very impressive. Music's good and there are a lot of rooms for how short it is. Hard mode's boss is a bit difficult and you might need some patience to get through it.
Finished.
Recommend.
By Abslb on Apr 16, 2022 (

)
65% in 0:19
Read More
Really cool hack, custom ASM is awesome, same for custom music (it does hurt the ears a little bit sometimes though).
Graphics are pretty good as well, level design is pretty neat too.
The biggest problem of the hack is balancing, enemies drop rates are way too low and the main boss is way too long once you use all your supers, charged beam just doesn't do enough damage.
Pretty fun hack overall, impressive for such a short amount of time, do recommend.
By Zincoshine on Aug 05, 2022 (

)
90% in 0:58
Read More
What an incredible achievement! This is one of the best metroidvanias I've found so far on metroidconstruction and it was made in only two days! It does suffer from some issues at the end related to balancing, these issues are caused by the unnecessary time constraint the developers placed on themselves but this is still excellent. A real surprise considering the last rushed mod I played was in a pretty bad condition. It is really shameful that this has been underrated so much.
By Marisko96 on Oct 26, 2022 (

)
90% in 1:06
Read More
weird hack, it felt oddly tangled up and fairly claustrophobic, i spent so much time lost but then i remembered i had spiderball and 100%'d it
woould maybe play again