Description
Samus has been hired to take out a Space Pirate mining operation on the planet Vulkin, a Class-XIII Wasteland. Due to the planet's uninhabitable nature, the Galactic Federation has no issues with Samus blowing up the entire thing, as is her specialty.

This hack was my entry into, as well as the third-place winner of, the Oatsngoats Hacking Contest. 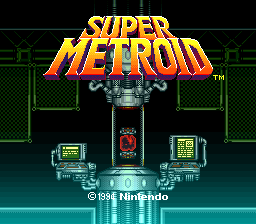 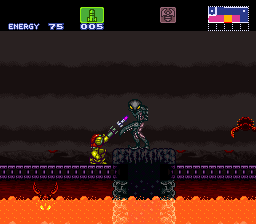 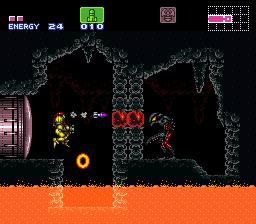 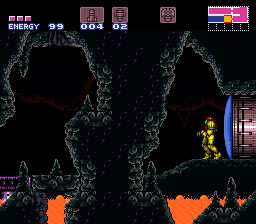 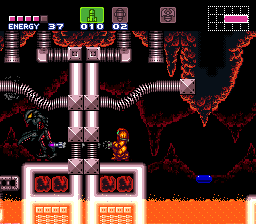 )
No completion stats.
Read More
Short, sweet and simple. Good custom music, level design (as expected from metroidnerd) and grafix.
Some of the pirate bosses mnerd does feel a bit too claustrophobic for my liking but that's not much of an issue.

)
84% in 1:53
Read More
This is really a neat and well-designed hack. It has new stuff you might not find in other hacks. But i was going to give it a 4-star because it's kind of short. Then I watched oats' playthrough and found i missed something really interesting and unique. i felt that might be the best part of this hack. that's why i gave it a 5-star. there are a bunch of secrets in this hack. some are hidden really well, so explore carefully.
By Sapphron on Dec 27, 2021 (

)
90% in 0:54
Read More
Excellent short hack! The music arrangement is really well done along with the custom tracks. Level design is top notch as usual from MetroidNerd, and it's just really fun to play through overall.
Finished.
Recommend.
By Sickwood on Dec 28, 2021 (

)
No completion stats.
Read More
Had the pleasure of being a beta tester for Hotlands. The level of polish from even the initial version was quite astounding. Metroidnerd had the courage to stray away from the usual G4 format, and created a hack that was fun to play, fun to explore, and brought something fresh and new to the most renowned hacked game ever. Its a must play for casuals or veterans and I can see it being a race hack for the ages. Congrats on the hack and winning some cold hard cash.
By Metaquarius on Dec 29, 2021 (

)
46% in 0:43
Read More
Here is my hot take on Hotlands: decent mini-hack overall, hampered down by health/ammunition farming concerns. It almost felt like I was doing low% while I did not want to ^^ Gimme charge!

Most bosses are a test of patience where you slowly farm ammo from rinkas and then aim and shoot at static red 1x1 cores while avoiding some hazards (which is not so bad in and of itself). If you enter this room with low health and/or ammo like I did, it quickly becomes a slog and waiting for ammo is not fun neither challenging. Some of these rooms have forced damaged, which means less ammo and more health, thus more waiting. None of these rooms are properly signaled to the player and you can't escape them. For some reason, those mini-bosses don't spawn drops on death so you have to keep farming.

The nail in the coffin was when I was stuck in the pre final boss room with no ammo left, grey pirates only vulnerable to supers and door closed behind me. One red core was blocking my forward path and I had only basic bombs to destroy it... which put me in range of those space pirates. Reset. Ouch last time I saved was before the ninja pirates + red core boss rooms which I really didn't want to do again...

)
59% in 1:19
Read More
Good short-ish gimmick hack. The limited number of upgrades you find were always useful, and the optional ones make some things easier but some other things harder in return. The room based bosses were simple but not frustrating. The single vanilla boss was balanced to match the limited resources of the hack. The creator definitely put Super Metroid's existing resources to good use. I don't know what other hacks were in the contest but I bet this hack definitely deserved placing in the top three. Also, my sister had to tell me the music was stolen from Undertale.
By Kremit44 on Jan 02, 2022 (

)
84% in 1:24
Read More
Excellent short hack that I wish had more. I hope the author goes back to this and adds because their is still a ton of room for a full sized hack to come of this. I beat it originally in 52 minutes but realizing I had missed a ton I went back and reloaded my save. Lots of hidden content. Great hack, thanks to all who helped.
By ocesse on Jan 19, 2022 (

)
100% in 1:42
Read More
Hotlands is a great hack, overall very good graphics and new music. What I liked the most in the game was the jungle area, the graphics of that area are impressive. And I also appreciate the effort in programming new bosses. Thanks for making it MetroidNerd#9001.
I definitely recommend that you play it, you will like it and you will enjoy it.
By Tundain on Feb 12, 2022 (

Very nice, I liked the music. The norfair + crateria tileset worked very nice. It might be short, but it's an awesome hack nonetheless!
By KaptenR on Feb 19, 2022 (

Read More
Awesome short sweet hack! It was a bit harder, which I like!
Nice to get some challenge, and not in a frustrating way, it was fun challenge!
I like the custom mini bosses. The hack was nice to look at, no areas that was hard to distinguish from what was what.
Some stuff was really well hidden, I would maybe have made some of it a bit easier to find, the secret grove area etc, since it
was quite some work put in there and upgrades there, a shame to miss that.
I like the new music, but one minus is that it got really annoying after had listening to it for 30+ minutes. It got repetitive.
Still I give the hack 5/5. Play it! :D
By Syphon on Feb 21, 2022 (

)
71% in 0:53
Read More
Great short hack with a good amount of secrets and nice custom stuff. Enjoyed it a lot.

)
87% in 1:01
Read More
Hotlands isn't sure if it wants to be a hack or a fangame of either Megalovania or Book of Mario, but it does provide some very solid . . .

To continue reading this review, upgrade to a MetConst Premium account today and receive perks such as reading top level hack reviews, one free monthly resource approval, and +V in Discord.
By dagit on Mar 23, 2022 (

)
68% in 1:20
Read More
This is a really good hack. It's got a few flaws but I can list them all on one hand. The big two are, there's too much lag in some rooms and there's no warning at the end of the game. I would have gone back and explored more if I had realized I was at the end.

I liked the custom bosses and events. It kind of gave me a metroid 2 vibe in a good way. This is also a hack that definitely rewards exploration. Lots of good things tucked away out of sight.

Overall, I would (and will) recommend this hack to people.