Description
First off, just as a warning to any less experienced players, walljumping is absolutely required from the very beginning. Other techniques that are required to complete the game are "infinite" one-wall walljumping, single bombjumping, and the midair morph. Some madd crumble block skillz are also required. As with most hacks, "infinite" bombjumping is not required.

Similarly to Dependence, save states are required because sadly there are no consistant, reliable regular save points. They cause even worse errors in this game when implemented than they did in Dependence. Try to keep a backup savestate, also. While this game has been playtested a lot and you shouldn't be able to get truly stuck at any point, as with almost any game, you can never rule out the possibility that you could get into a difficult area with low health and have a tough time escaping or something of that nature.

Physical difficulty (i.e. the need for feats of manual dexterity) is definitely stepped up from Dependence. Also, unlike that hack, this one is less nonlinear in the order of the bosses you fight and items you collect, although path you follow through the areas may be quite nonlinear, most notably the many connecting passages throughout the opening area. It's still about as nonlinear as most other hacks out there though. 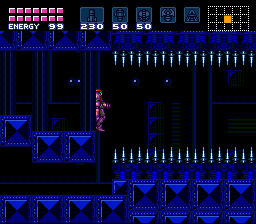 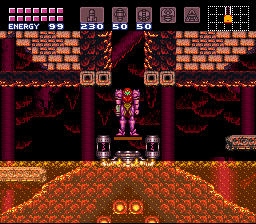 )
No completion stats.
Read More
If you can accept looking at a map of the layout of the hack to find the solution to a few puzzles along the way, because you will likely get stuck a few times, there are some absolutely great and weird room designs. This is especially true in some of the later areas. Although there's no new graphics inserted into the game, in many cases, the original game's graphics are used in ways that are very creative and alien to the way they're used in the original game, and barring new graphics entirely, that is what I'm after when I play a hack.
By Aran;Jaeger on Dec 08, 2016 (

The good:
Hack WAS challenging - some areas were pretty nasty tho.
Most rooms were interesting and unique in their own way.
Minor items such as missiles etc. were easy to find after you found em ONCE

The bad:
Hack WANTED to be CHALLENGING but failed to be it in some rooms - bad design decisions - enemies in your face, RNG luck based boss fights and so on.
One of the WORST "have to find to progress" paths for varia suit that I've ever encountered... followed by "AM I EVEN SUPPOSED TO BE HERE?" moments and "WHAT THE F*** IS GOING ON" rooms.
Had to re-do the damn ESCAPE because I had a hard time finding my way through the damn FIRST ROOM...
Skytemple.. OH GOD WHY... thats EYE-CANCER-TEMPLE for you! Hope you have bad dreams and nothing to eat! >:O

The meh:
I consider my self experienced and this hack was in no way difficult at any given point, just weird, unfair and as I mentioned above, a wanna be challinging - thing.

If you don't have enough e-tanks, you gonna die in many.. maaaany rooms, this hack makes BACKTRACKING MANDATORY, which makes it kinda hard to get through the hack, because most rooms are just TOO BIG.

Boss fights I consider ok are: Kraid, Crocomire, (Phantoon), GT, (Torizo)
Yep, that's it. Let me say something about that. If you find the bombs, you might die! Why? Because you simply can't see the future and dont know what's coming for ya in the next room. Spore Spawn... if you have enough energy, go ahead, otherwise... you might die miserably. Same goes for Phantoon and especialy for Draygon.

I finished the game... believe it or not, without EVER finding HIGH JUMP - SCREW ATTACK - WAVE+PLASMA, missing 3 e-tanks and 2 reserve (Spazer is one of the worst hiding spots, too).
Speaking of bad hiding spots - mandatory items... this hack did it with almost every damn item that makes it easier to navigate through areas!

Even tho you're warned about hazards and so on... most of the time it just feels of getting thrown into a new room and first thing that happens is getting hit by hoppers... or spikes.. or being in acid.. lava whatever..
By Black Luster Soldier on Mar 29, 2018 (

)
100% in 2:44
Read More
Terrible. No save stations (aside from your gunship) so you're going to have to use save states. Also, crumble block navigation without Spring Ball, too much forced damage, hidden upgrades up the wazoo, and other bad design all around.

)
74% in 6:22
Read More
Please don't play this hack. No save stations, a disgustingly bright final area, unbelievable requirements for progress, hidden passages up the ass, etc.
However, I must say that it has some extremely interesting design aspects + lots of cool exploration if you do play it, and it gets bumped up to 2 stars for that.
By Jeetkundo on Apr 02, 2020 (

)
No completion stats.
Read More
about 9 hours wasted
got as far as grapple
trash hack, delete
edit: might be tolerable/interesting with savestates
By Sickwood on Dec 03, 2020 (

)
No completion stats.
Read More
I avoided this hack for a long time because of reviews, but after jonesing for a full exploration hack I gave it a try. I have to say that I liked it way more than Dependence and was actually a pretty good blend of challenge and exploration. Dependence to me was too bland, this one was more creative. Yes there are no save stations and I did have to look at a map a couple times for obscure hidden wall stuff for the sake of time, but considering this was made in 2007, I have to give the author a lot of credit. As others have mentioned the yellow final area was obnoxious, but the rest of the hack level design and tiling was pretty interesting. If you've played all the good major overhaul hacks, enjoy twisted exploration and a bit of challenge, I'd give this one a shot and I'm glad I did.
By Zhs2 on Jun 22, 2022 (

Read More
Man, and I thought Eris 2012 was bad. THEN I made the mistake of moving on over to replaying Golden Dawn and OH GOD it is actually ten times worse than Eris. Let's just list off a few short reasons why:

- Foreground air tiles. They are EVERYWHERE. They hide VITAL PASSAGES. Good luck navigating without visiting Metroid Mapstation.
- Bad level design. Crumble blocks were a sensation in old challenge hacks and this one is no different. You are expected to deal with terrible spike sections even before Varia suit and lots of walljumping. LOTS of doors in this hack's equivalent to Norfair connect to full-height lava or even ACID rooms. And there are deliberate sections where BT does a little trolling. You have been warned.
- Horrible boss rooms plagued with spikes. Some require upgrades or definite cheese. Botwoon in particular requires Wave beam.
- And speaking of Botwoon requiring Wave beam, you are pretty much required to traverse acid rooms without Gravity so you can get Wave so you can beat Botwoon so you can get Spring Ball and consequently Gravity. It's terrible.
- And if you make it through the first 70% of the hack you are treated to neon bricks contrasted with eye-raping green backgrounds and yellow skies. Did BlackTelomeres even play this far in his own hack?

Mother Brain also crashes before moving to phase 2 in higan/bsnes. Do not recommend this hack too seriously, even with a map. Anyone above who says otherwise is a masochist. Play Dependence instead, which I'm pretty sure I have way better memories of.